I grew up dreaming of dragons…

As an isolated teen, I spent more time inside books than anywhere else. And when my Mom gave me my first Anne McCaffrey novel, The Ship Who Sang, I found a voice that spoke to me. 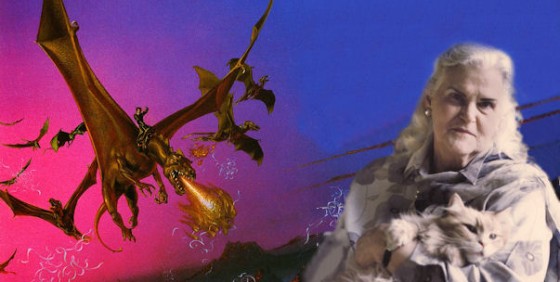 Anne’s writing was soaring, yet approachable. Her characters dealt with pain, and fought as hard with their brains as with any other weapons. She transported me to a world at once familiar and yet strange and wondrous. I became a huge fan.

The DragonLady, as she was affectionately known, had a quirk about her writing. Today we’d call it…well, I’ll tell you about it.

I’d just received a box set of the first Dragonriders of Pern trilogy for Christmas, and was determined to plow through all three books before I went back to school. So I dove in to the first novel, Dragonflight and thrill to the story of Lessa, a fierce young woman who holds the key to the safety of the people of Pern, and her trip across time, a desperate leap of faith to bring back the riders necessary to save the planet.

At the end of that leap, she ends up centuries in the past, at Fort Weyr, a guest of the Weyrleader, T’ton, who she persuades to come forward with her. They do, Lessa is reunited with her weyrmate and Benden Weyrleader F’lar, and the day is saved!

I put down that novel, and started in on Dragonquest, the second novel. There’s tension between the “Oldtimers” who came forward with Lessa and modern dragonriders. When this spills over into actual violence, a knife fight results in a critically wound F’nor, the half-brother of F’lar – the Bendan weyrleader. All the weyrleaders, new and old, agree to meet and discuss what happened. Striding angrily into the room, the Fort weyrleader, T’ron—

Wait. Hold up a minute. T’ron?

Why, yes. Yes it was. The name changed from story to story. In the business, we call that a continuity error. Or as McCaffrey fans call it online, an “Anne-achronism.”

I remember laughing when I read that. You see, to me, that meant Ms. McCaffrey was even more relatable! She was a real human – she made mistakes, and yet she was still wildly, wonderfully accomplished. It gave me hope, to think that if someday, I ever became a writer, maybe I could entertain others as well as she’d entranced me.

And certainly I’d never have a problem like that…

Fast forward almost 35 years. I’m a published author now, and I’m building a short story based on an incident I mentioned in my first novel. It’s moving along quickly, flowing wonderfully. And I’m just about ready to release it. In fact, I’m at the point where I’m starting to write the short description.

It occurred to me that the perfect way to do this would be to quote the short passage from the original novel that inspired this tale. So I crack open my copy of TRIANGLE: FALSE MIRROR, turn to Chapter 17, and read the following:

Steve looked at Rose, trying to decide how much of his past he could really trust her with. “Umm. Well, you know how I’ve been in Europe doing freerunning for the past three years, right?”

“Well…during my time there, I haven’t always been in Europe.”

Rose looked at Steve and raised an eyebrow. “Do tell.”

Steve looked out the window, avoiding her gaze. “Not much to tell, really. It started when Robert, one of the guys on the circuit, needed help with his family. So I went to help them out of someplace that was, well…” He trailed off for a second, unsure how to continue.

“Let me guess. Not in Europe.”

Her eyes narrowed. “How far south?”

He glanced back at Rose. “Very.

Which was all well and good. except in the short story I had just finished… Steve’s fellow runner wasn’t named “Robert.”  Nowhere near it. Oops.

If I hadn’t chosen that method to market my own novel, I wouldn’t have caught it until after the story was published….

At that moment, I felt abashed, embarrassed… and then I had that fun moment when I realized that must be exactly how Anne McCaffrey felt when someone pointed it out to her the first time!  And what’s even more ironic is that I had advantages Ms. McCaffrey didn’t when she wrote her novel – she used a typewriter, paper, meaning the use of a red pencil….nary a word processor or a spellchecker in site.

Suddenly, I felt a sense of connection, across time and space, with someone I had admired so much. I was literally walking through in her footsteps. At once amused and humbled, I made the corrections, and the short story, TRIANGLE: RESCUE, was released online on time.

Still, I can’t help but thinking that Anne is sitting in the writer’s lounge in the great beyond, enjoying a cup of her favorite beverage and chuckling at how foolish I was.

Writing is harder than it looks. But moments like that make it worth the effort.

Postscript: The whole T’ton/T’ron thing wasn’t the only name misspelling, or “Anne-achronism”, such as they were. It was just the first one I caught. Another notable one was how the name of the gold dragon that paired with Mardra, the weyrwoman of Fort Weyr changed spelling from Pridith to Prideth.

But if you think about it, that makes perfect sense in terms of the Pern universe. Surely you’ve heard the old adage…

Prideth goes before a Fall.

D.G. Speirs is a storyteller, novelist and voice actor living in central Florida. He keeps searching for better stories to tell, even if he has to make them up himself. His latest novel, THE AGENCY, is now available on Amazon.com.
View all posts by D. G. Speirs →
This entry was posted in Fiction, Writing and tagged Anne McCaffrey, Dragonriders of Pern, literature, nobody's perfect, oops, Triangle: False Mirror, Triangle: Rescue, writing. Bookmark the permalink.

1 Response to The One About Anne-Achronisms