The One About Dwayne McDuffie 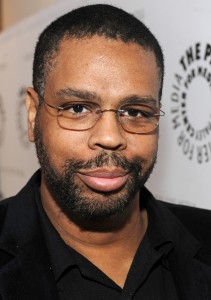 A lot of people have been wondering why I don’t look like myself these days on Facebook and Twitter. Well, there’s a reason. My profile pic for the month of February is that of Dwayne McDuffie.

For the uninitiated, Dwayne was a brilliantly imaginative writer. He had a master’s degree in physics, but then went on to create the comic book characters Static Shock and Hardware, and then write and story edit practically the entire Justice League series that appeared on TV in the early 2000’s, as well as scripts for Ben 10, Teen Titans, many DC Animated Universe films and much, much more.

Dwayne passed away suddenly in February of 2011, one day after his 49th birthday. He was here one day, and gone the next. His loss was a shock to so many writers in the animation community He was and still is beloved to this day. I was a huge fan, and as a writer of adventure novels that deal with characters of this type, consider him somewhat of spiritual guide, if that term can make a sense to folks. His work was an continues to be an inspiration to me, and I strive to measure up ti the high standards for story telling he set.

His wife, Charlotte Fullerton, who is herself a brilliant screenwriter that I came to know through my work on the Kim Possible anniversary project last year, asked people to honor Dwayne this month by changing their profile pictures. I consider myself honored to do so.

To learn more about Dwayne, his life and work, I suggest you visit the web site set up to honor his work: http://dwaynemcduffie.com/

One other way to remember and honor Dwayne is to recognize his craftsmanship in the work he produced as a writer and story editor. Here is a link to what I consider one of his best works – the episode “The Brave and The Bold” from the television series Justice League.

D.G. Speirs is a storyteller, novelist and voice actor living in central Florida. He keeps searching for better stories to tell, even if he has to make them up himself. His latest novel, THE AGENCY, is now available on Amazon.com.
View all posts by D. G. Speirs →
This entry was posted in Miscellany, Writing and tagged animation, Ben 10, Charlotte Fullerton, Comic Books, DC Animated Universe, Dwayne McDuffie, Justice League, Milestone, Static Shock, Teen Titans, writing. Bookmark the permalink.

1 Response to The One About Dwayne McDuffie