The One About A Funny Thing Happened…

The job started as an “Oh by the way.”

We’ve all had those in our lives. “Oh, by the way, can you….[insert something useful/interesting/distracting here] for me?” And you say sure, because mostly, they are no big deal.

Except this was a big deal.

“Hey, Dad, Oh by the way, since you are already Santa Claus for SeaTac Airport, do you want to do it for Blue Thunder at the Seahawks game on Christmas Eve?”

And so began my career as a Seahawks Santa.

It’s a completely voluntary gig. The only compensation I get is three-fold:

1) I get to attend the game and cheer for my favorite football team, the Seattle Seahawks;
2) I get to be with my daughter, who plays cymbals for the Blue Thunder drum line, as well as all the other AMAZING musicians in the group; and
3) I get to bring holiday cheer to thousands of fans from 8 to 80 and more.

This past Christmas, I was granted an additional privilege, to beat the Northwest’s largest bass drum during player introductions. 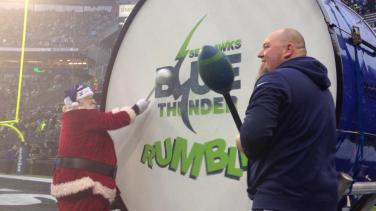 That was an amazing moment, and a gift from Keith Rousu, the leader of the drumline.

The fans at CenturyLink field  are amazing. They get into the hoiliday spirit, and love to get  their picture taken with Santa. This season I even ended up with my own personal reindeer!  You can’t beat that for quality service. Name a stadium elsewhere in the country that will afford you that luxury. 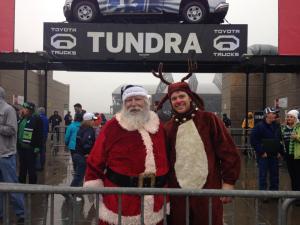 Blue Thunder is an amazing group, and they carry and represent the spirit of the 12th man everywhere – even to New York this past February for Super Bowl XLVIII.  And now, for the upcoming season, they are taking applications for auditions for the 2014 drumline…

Well, a funny thing happened on the way to the audition.

One gentleman submitted his, confident he’d get his spot.

For his instrument, did he put down snares? Nope.
Maybe cymbals, or one of the tonal bass drums? Nada.
Oh, so he wants to play the quints, those five-drum sets that require real musicianship and precision? Not in the least.

Then what position could he want?

For the first time in the history of Blue Thunder, somebody submitted an audition application for Santa Claus.

And just a little tweaked that after three years someone thinks they can do it better than me.

And have just one thing to say to the guy.

D.G. Speirs is a storyteller, novelist and voice actor living in central Florida. He keeps searching for better stories to tell, even if he has to make them up himself. His latest novel, THE AGENCY, is now available on Amazon.com.
View all posts by D. G. Speirs →
This entry was posted in Performing, Santa Claus and tagged Blue Thunder Drumline, CenturyLink Field, Santa Claus, Seattle Seahawks, Super Bowl Champion Seattle Seahawks, Super Bowl XLVIII. Bookmark the permalink.
%d bloggers like this: