The One About The Other Projects…

I mentioned in an earlier post I have two other “deadline-based” gigs. I should clarify.

These gigs aren’t outside jobs, but my own creations. They each started from observations I noted while watching the show My Little Pony: Friendship Is Magic.

The first and older of the two projects is The Tao of Maud. It is a daily post, centered around the concept that the character of Maud Pie is actually Zen-based. It’s more aphorism based, recycling quotes from famous sources modified to fit the world it is based from. We hit day 250 this week. 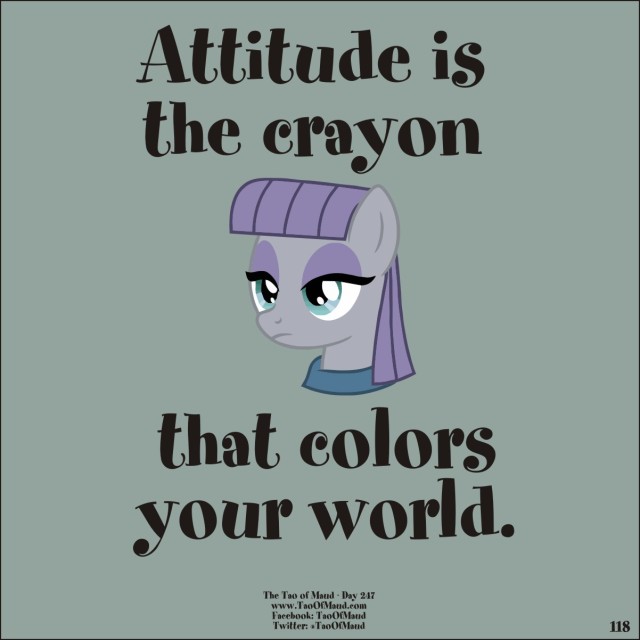 The second role is newer. Again based on My Little Pony it also has its roots in a specific episode – the 100th episode, Slice of Life. About three-quarters of the way through, this happened:

Gummy had until this point just been a silent character – stoic to the point of functional inactivity at times. Now we know why. He’s a Nihilist. You know what they say – still waters run deep. This just proved they are also gator-infested.

From this moment, I saw an opportunity to create a commentary style panel, The Te of Gummy. 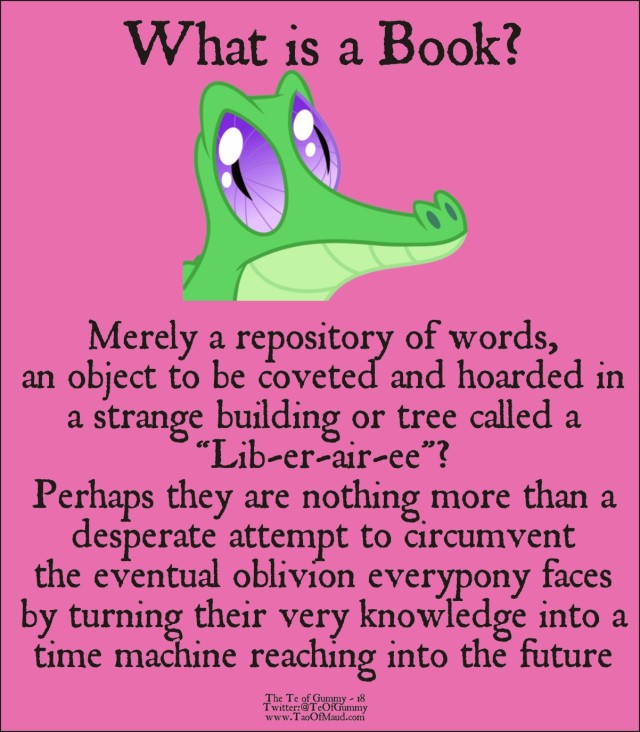 The Tao of Maud is relatively easy to write. Actually, it feels more like I am curating a collection of ideas and determining how best to display them.

The Te of Gummy is a pure tightrope walk. I have to come up with a topic, an observation, a pony-connection, and publish it all within a 24-hour period. It’s a different style of writing than I am used to. The adrenaline rush is amazing, as is the sheer terror when I’m drawing a blank. It is stretching my wings as a writer.

D.G. Speirs is a storyteller, novelist and voice actor living in Florida. He keeps searching for better stories to tell, even if he has to make them up himself. His latest novel, THE AGENCY, is now available on Amazon.com.
View all posts by D. G. Speirs →
This entry was posted in Writing and tagged Blogs, My Little Pony, Philosophy, writing. Bookmark the permalink.
Loading Comments...