The One About…My Review of In Her Name: Confederation

This is a very long overdue review of In Her Name: Confederation, available on Amazon. 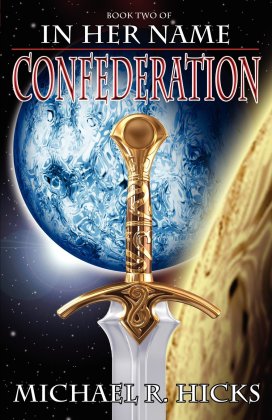 Second books in a trilogy often suffer from what I call “Jan Brady Syndrome.” They have to create their own interest while being burdened with standing in the shadow of the first story in the series. It can be a daunting task, especially when trying to present vital information that was already dropped on the reader earlier. You could do a “previously on ‘In Her Name'” exposition dump, or drop little bits here and there in dribs and drabs throughout, reminding and informing. I’m a fan of the latter and so is Mr. Hicks, which is a good thing, as I’ll explain below.

In Her Name: Confederation is the second part of a three-part space opera in the tradition of Heinlein, Asimov, or Sturgeon. Specifically, it’s the continuing adventures of Reza Gard, who in the first book was captured by the Kreelans, an alien species involved in a 100-year war with the Human Confederation across the galaxy, trained by them to be in their ways to be a warrior, and then returned to human civilization. Now Reza, facing the galaxy’s worst case of Stockholm Syndrome ever, must find his way to assimilate back into a society he is completely unacculturated from, with practically no social skills and really only one marketable talent – killing things. What’s a growing boy to do? Well, there’s this war that’s been going on…

It’s an entertaining read. Michael really likes how detailed his world is, sometimes to the detriment of his pacing, and it jumps back and forth inside the heads of characters during a conversation like a ping-pong match, but those are quibbles. There are a few minor grammatical things, mostly with verb tenses, but a lot of those have to do with the way some of the characters talk. Michael has striven HARD to give every single character a unique voice, much more so than I’ve seen from any other author I can remember. It’s an impressive undertaking, an amazing amount of effort.

The one thing I don’t see, though, is a growth arc for the main character. He hits a plateau, and then he stays at that point, despite everything that happens to him and around him, for the remainder of the book (and based on the behavior, the remainder of book three as well). I hope I’m wrong because he could be such an awesome character.

Overall, though, a definite recommend – not just this, but the whole In Her Name trilogy.

D.G. Speirs is a storyteller, novelist and voice actor living in central Florida. He keeps searching for better stories to tell, even if he has to make them up himself. His latest novel, THE AGENCY, is now available on Amazon.com.
View all posts by D. G. Speirs →
This entry was posted in Uncategorized. Bookmark the permalink.
%d bloggers like this: